The Utah Department of Agriculture and Food (UDAF) Invasive Insect and Quarantine program completed its second year of Japanese beetle (JB) eradication activities in 2021 and the results are promising.  Based on data collected from traps set after turf treatments were made, the number of JBs captured were reduced by 35% compared to the previous year.  UDAF has created a treatment plan for spring of 2022; this plan was unanimously approved by the JB Decision and Action Committee on February 17th. It includes:

Maps of these treatment areas can be found in the “Documents for Residents Within Infestation Area” section.

UDAF will be hosting an open house video conference meeting on March 24th (6 pm – 8 pm) for stakeholders wanting to learn more about JB and the eradication project.  Please come back to this website for login details on the day of the meeting.

The invasive pest Japanese beetle Popillia japonica (Newman) was first detected in the U.S. at a New Jersey nursery in 1916. Over 100 years later it has spread to more than 35 states – all established Japanese beetle populations are east of the Rocky Mountains. In its native environment, the Japanese beetle is not considered a major pest; this is likely due to host/plant resistance and numerous natural enemies that help keep populations in check. In the U.S. it has been a different story. In the spring months, the larval stage (grub) of the beetle feeds on the roots of grass and is considered a severe turf pest. The beetle pupates under the soil in late spring and emerges as an adult in early summer. Adult beetles have a voracious appetite and can feed on the foliage of over 300 different plant species. UDAF annually places thousands of traps statewide to monitor for this pest.

Both as adults and grubs (the larval stage), Japanese beetles are destructive plant pests. Adults feed on the foliage and fruits of several hundred species of fruit trees, ornamental trees, shrubs, vines, and field and vegetable crops. Adults leave behind skeletonized leaves and large, irregular holes in leaves. The grubs develop in the soil, feeding on the roots of various plants and grasses, often destroying turf in lawns, parks, golf courses, and pastures.

USDA estimates that efforts to control the larval and adult stages cost more than $460 million each year. Losses attributable to the larval stage alone have been estimated at $234 million per year—$78 million for control costs and an additional $156 million for replacement of damaged turf.

Students from Westminster College's economic department created an economic impact analysis that predicted the damage costs to turf and corn in Utah, if the quarantine were to end and JB were to become established in the state.

If you have questions regarding the Utah Japanese Beetle Quarantine please contact UDAF at 801-982-2311.

History of Japanese Beetle in Utah

In 2006 an Orem resident found a Japanese beetle while tending her garden. She reported the finding to UDAF, which set in motion an extensive trapping effort to determine the extent of the infestation. A total of 675 Japanese beetles were found that year alone.

The trapping season of 2007 was far worse, with over 2,000 beetle detections. The infestation measured approximately 100 square residential blocks. At the time, eradication of an infestation this large had never been attempted in the United States. However, UDAF was undeterred and in cooperation with the city of Orem, decided to embark on an unprecedented eradication effort.

Through intensive pesticide treatments over several years UDAF was able to bring Japanese beetle populations down. By 2011, not a single beetle was detected and just three years later the eradication effort was officially declared a success.

UDAF has devised a 2022 treatment plan for all areas infested.  Whenever possible throughout this process, UDAF has formed partnerships with cities, landscape managers, private companies and other institutions to conduct voluntary controls.  While this approach continues, many of the places where the beetles have been found recently make such arrangements unfeasible and therefore a Plant Pest Emergency was declared to ensure that infested areas are treated effectively and JB populations do not establish.

UDAF has selected Acelepryn®, a non-restricted use pesticide for the project.  The pesticide is proven effective in controlling JB and it has low toxicity for humans, pets, bees, birds and earthworms.  It is classified by the U.S. Environmental Protection Agency as a Reduced Risk Pesticide.  Though the product has an excellent safety record, UDAF will be taking extraordinary supplemental efforts to ensure that pesticide applications have minimal impact on residents and the environment.

In preparation for treating turf on school properties, UDAF will be working with school district officials to make certain that treatments are made when students are not present (nights or weekends).  This will allow the product to move into the soil and dry.

State pesticide enforcement officials will supervise the entirety of pesticide applications to ensure that federal and state regulations are followed.  This supervision will ensure that residents, water quality and the environment are protected.

Documents for Residents Within Infestation Area

Map of eradication areas can be found in the postings below.

From 1996-2005 approximately 500 Japanese beetle traps were placed annually.  In 2006 a large population was detected in Orem, which was later eradicated. 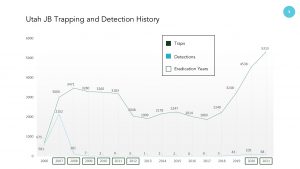 What is this green thing that looks like a bomb?

It is a Japanese beetle trap (and it is not explosive).

Why was this trap placed?

Utah maintains a quarantine of the invasive insect pest Japanese beetle, which is established in states east of Utah but is absent here. Traps are placed in all of Utah’s 29 counties to monitor for the insect as a secondary line of defense.

How does the trap attract beetles?

The trap includes a combination pheromone and floral lure, which mimic the scent of other beetles and flowers which are attractive, to the Japanese beetle.

Is the trap or lure harmful to people or pets?

The trap and combination lure are considered very safe for people and pets. The lures are not attractive to animals other than insects. Nonetheless, we ask that you use common sense and do not touch the trap or lure. If a trap needs to be serviced and relocated, please contact our program at 801-972-1669

Will it attract bees or other beneficial insects?

While the trap and lure is designed to specifically attract Japanese beetles and efforts are made to reduce by-catch, occasionally other insects will end up in the trap. However, compared to other routine activities that kill insects, such as cars, artificial night lighting and bug zappers, their impact is likely negligible.

Is it okay if water gets on the trap?

Yes, rain and irrigation do not affect its ability to attract insects.

What if I don’t want the trap on my property?

The Japanese beetle trapping program is a voluntary effort; to request removal, please call our program.

Will the treatments control other turf pests?

Yes!  In fact, many people are paying professional landscaping companies to have this product applied to their lawn to control other insects.  Although Acelepryn® has low toxicity to many beneficial insects, it has great efficacy in controlling various turf pests beside JB.  Pests that are labelled for control include: armyworms, cutworms, chinch bug, billbugs, sod webworms and other white grub pests.  Therefore, if your irrigated turf is infested with any of these other pests, it will likely benefit from this treatment.

How does UDAF know where JB is (and isn’t)?

The UDAF Invasive Insect Program has one of the most robust JB detection programs in the country. All of Utah’s 29 counties are annually surveyed for this invasive pest via trapping. Traps placed as a method of early detection are part of the standard detection survey. Standard detection traps are placed at a density of approximately two traps per square mile in areas of the state that have host material that is suitable for JB survival. Therefore, in years where not even a single JB is detected, there will be roughly 1,800 traps placed just as a precaution! However, when a JB is detected, trappers will set up a “delimiting grid,” which usually involves placing 100 traps, about 75-150 meters (250-500 feet) apart in a square block centered around the capture site. These traps are checked on a bimonthly basis. If no other beetles are found in this delimiting grid for two subsequent years, it can be assumed that JB did not establish in the area.  It is not uncommon for the program to find a couple of beetles in a given vicinity, heavily trap the area and find no beetles in succeeding years. While there are many explanations as to why this may happen, the most likely scenario is that a handful of beetles were artificially transported within the state, however there were not enough individuals to create a stable population.

Nonetheless, there are instances where a beetle is found, a delimiting grid is set and more beetles are found later. In this case, the delimiting grid will be enlarged and it will expand in the direction of the capture. For instance, if a JB is found on the northwest corner of a grid, then additional traps will be placed surrounding the existing grid in that direction. However, if additional beetles are found in the same trap that originally caught the target pest, there is no need to enlarge the grid. This is because the entire purpose the delimiting grid is to determine the extent of an infestation; there is no reason to expand the trapping because it is already known where the beetles are located. Delimiting grids are especially helpful in determining if and where interventions are needed to eradicate a target pest. As mentioned, Utah’s JB standard detection survey is large and covers the entire state. Therefore there is a great degree of confidence in where this pest is present or not present. 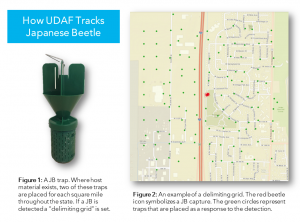