Highly Pathogenic Avian Influenza (HPAI) is a serious disease and requires rapid response because it is highly contagious and fatal to poultry. The Utah Department of Agriculture and Food works with federal and industry partners to quickly mobilize a response to any HPAI findings and prevent further spread of the disease.
. 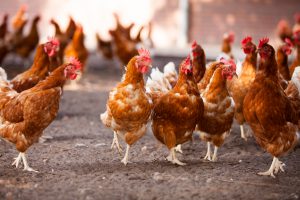 UDAF confirmed the diagnosis of HPAI in a small backyard flock in Utah county on Friday, April 15, 2022. Highly Pathogenic Avian Influenza has been spreading across the United States resulting in high losses in the poultry industry. Avian Influenza is a highly fatal disease in poultry that can be spread by waterfowl, which are usually asymptomatic. Waterfowl are the major source of infection at this time as they migrate across the United States.

Individuals involved in poultry production from small backyard flocks to commercial producers should practice strong biosecurity measures, including keeping poultry away from waterfowl, and to monitor for symptoms of HPAI, which include:

If your birds are experiencing any of these symptoms,
please contact the state veterinarian’s office immediately at statevet@utah.gov.

For more information including a nationwide map, click here.