For the opening day of the Chocolate Tour of Utah we thought it would be fun to get schooled on classic dipping confectioner’s Chocolot of South Ogden and Idle Isle of Brigham City, then get a quick lesson on the basics of bean-to-bar production at the Aggie Chocolate Factory in Logan. It was a lot to get done in one morning but we got a great education to launch the tour! 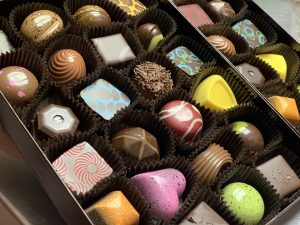 Ruth Kendrick has been making candy and various chocolates for more than 50 years. She is a second-generation chocolatier, having learned at her mother’s (Pauline H. Atkinson) side. Ruth and Pauline co-authored Candymaking (you can get it on Amazon), which includes their favorite recipes and helpful hints. Ruth has gone on to teach many classes in candy making throughout the country. She works out of a small, but tidy little shop in the hills south of Ogden. Though her operation is small her influence and reputation in the chocolate industry are big. She makes a wide selection of chocolates that are, in her words, “too beautiful to eat, but too delicious not to eat.” We agree!!! 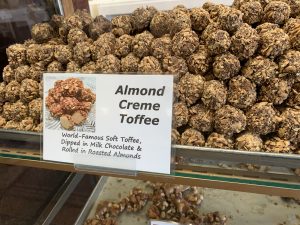 Established during the roaring 1920s, Idle Isle has been one of Northern Utah’s go-to candy makers for several generations of Utahns. Over the years family members of the business evolved to open a restaurant across the street. But their focus on candy was vibrant, developing more than 40 candy recipes, including hand-dipped chocolates. In 1994, the restaurant was sold and the owners re-dedicated their efforts to expand the candy business. A new building was purchased and remodeled to facilitate an expansion of their production and walk-in store. Today, Idle Isle offers a wide selection of amazing and very unique hand-dipped chocolates and other candy. 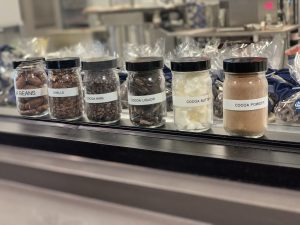 Aggie Chocolate Factory is perhaps the newest addition to Utah’s famed chocolate scene. But the factory isn’t just a chocolate maker, they are an active chocolate school – a lab for making chocolate from the bare beans to chocolate bars and other treats. Their cocoa beans are sourced internationally from five countries, including Belize, Ecuador, Tanzania, Madagascar, and Peru. The Aggie Chocolate Factory receives its chocolate in jute bags and from there sorts and places them into specialized roasting equipment that produces the chocolate. There are several other steps you watch students performing in real-time if you drop into their shop.