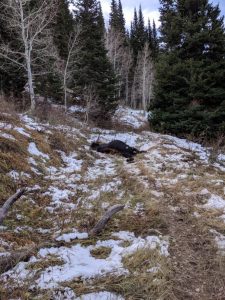 One of four cattle losses reported

“We are deeply saddened and concerned over recent reports of criminal activity leading to the loss of several cattle in Utah,” said Commissioner Kerry Gibson, Utah Department of Agriculture and Food. “As such, it’s important that UDAF and our partners at Farm Bureau and Cattlemen’s stand united in condemning these losses, and to incentivize information coming forward that leads to justice,” concluded Commissioner Gibson.

The commissioner’s statement comes on the heels of investigations into three reports of cattle being shot in Utah, Iron, and Box Elder Counties over the last couple of weeks. A $2,000 reward has been contributed by UDAF, Farm Bureau, and Cattlemen’s for information leading to arrest and conviction of the person(s) who maliciously shot livestock in those counties.

“Any loss of cattle is devastating to our ranching community,” said Leann Hunting, UDAF Animal Division Director and Utah Brand Bureau Chief. “We would just ask that anyone with information – hunters, outdoor enthusiasts and others to report any suspicious activity or observations that lead us to a resolution of these crimes.”

According to the US Department of Agriculture’s 2017 census, there are approximately 800,000 head of cattle in Utah with an average value of $1270 each.