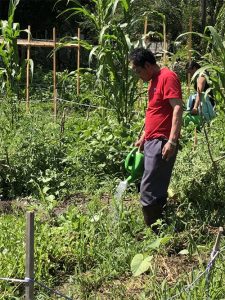 Don’t be surprised some evening if, in a quiet Logan neighborhood on a back vacant lot between homes, you hear the excitement of Burmese children playing as they gather with parents and grandparents to tend their community garden plots, tell stories, play and dine together.

Faced with untold persecutions in their home countries, these first-generation Logan-ites have endured a lot to reach the Cache Valley. Upon entering refugee camps, they had to patiently wait several years of interviewing and vetting before making their way to the US and eventually Utah. Those who made it represent a class of only one percent who have done so.

There are an estimated 500 to 600 refugees from Burma, Ethiopia, Sudan, Eritrea and Somalia who ended up settling in the neighboring towns of Logan, Hyrum and Nibley. Not long after their arrival in 2011 community leaders and volunteers began work to create the Cache Refugee and Immigrant Connection (CRIC) an adjustment resource center for newcomers to rebuild their lives.

In the years that have followed, CRIC has been instrumental in providing walk-in support, citizenship and driver’s license study groups, back-to-school drives, potlucks and other events. But most noteworthy here is the creation of the community garden in 2017.

For about a year CRIC was able to help obtain a short lease on a garden plot in Smithfield. However, the distance made participation difficult for the refugees. So, in 2017, CRIC officials asked about a lease on a plot of land in a neighborhood near where many of the refugees were living, making access simple. The landowner agreed and with some donations and a grant from Utah Department of Agriculture and Food (UDAF) through NRCS, engineering and water improvement projects were arranged.

“The first year before the irrigation system was installed they were getting water from a ditch with buckets,” says Crista Sorenson, Cache Refugee Immigration Garden Coordinator and USU Extension Incubator Farm Manager. “But now, with this new system, we are educating them about overwatering as it only takes about 15 minutes to saturate their plots and significantly increase their production.”

The garden has grown in terms of interest as well, attracting about a dozen families when it started to this year’s 29 plots and 32 gardeners. But it’s also become more than just a garden, each night for several hours entire Burmese families gather and the whole area becomes erupts with the sounds and smells of music, laughter, and open-flame cooking. 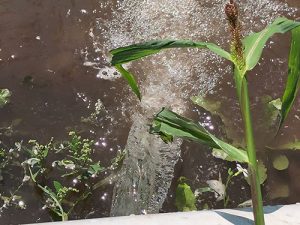 Sorenson said that presently the gardeners are getting acclimated to what grows well in the shortened Cache Valley growing season, and learning about local foods that grow best. However, she hopes to introduce them to concepts of marketing their goods at the Cache Valley Farmer’s Market, CSAs, and roadside stand opportunities in the years ahead.

“You will see quite a diversity of foods – things you will not see in our supermarkets. If it’s from their home country and they can grow it, they will. However, some of their tropical favorites from the homeland probably aren’t going to happen,” Crista laughs.

“This project is truly what Utah is about,” said an emotional Kerry Gibson, commissioner of UDAF. “We take care of our own, but we also look out for our neighbors – even those from far off lands. The refugees in Logan, Salt Lake City and other places represent a wonderful opportunity for us to blend our cultures of agriculture and community together as one people under God.”