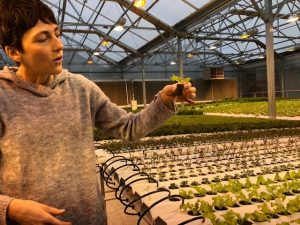 Nutritionist Page Westover and her entrepreneurial husband, Brian, wanted several things as parents to their four children: self-sufficiency, a slower lifestyle and to preserve the remaining three acres of Pleasant Grove farm her grandfather Boyd “Snuck” Fugal had worked his entire life.

Since Snuck’s passing most of it had been sold off and is now housing, but to Page, the last of it represented a history she didn’t want to let go.

Another farm would be great but it wasn’t big enough for that anymore… or was it?

In 2015 she and Brian made a bold move. With the last of the family’s land, they re-opened it to farming. But this time, Snuck Farm as it is now called, did things a little different than her grandfather, embracing the fascinating and emerging world of hydroponics farming.

Hydroponics is a method of growing plants without soil, using mineral nutrient solutions in water. Held together by a simple foam base, the plants are grown side-by-side in long PVC rain-gutter-like systems fed by a steady trickle of water that gets recycled.

This may sound space age, but it’s actually been around for a century. The commercial element, however, is still fairly new and growing quickly. Within the last 20-30 years, many commercial hydroponic farms have been popping up. Along with saving space and efficient use of water resources, the Snuck hydroponic greenhouse is producing fresh produce year-round.

Page loves the challenge and has learned a lot, she says, about their budding trial-and-error farming operation.

“This past year has been the first year where the farm has broken even,” she says proudly. And she should be proud, the family and their dozen or so employees are feeding thousands of Utahn’s fresh, locally-grown produce when the temperatures outside are below freezing.

Along with individual weekly CSA-like subscriptions, Snuck’s has secured contracts with restaurants and corporate cafeterias cropping up from the nearby Silicon Slopes offices. Prior to the efforts of the Westovers, much of that food had to be shipped in from out of state and even out of the country.

But wait, there’s more. The family also sells fresh eggs from their 100 chickens, flowers aplenty, partners with Abigail’s Oven for bread, milk, honey, and yogurt, and is building a fresh produce stand that will open this summer.

Education is also important to the Westovers so they built a 30-seat classroom where they organize workshops on beekeeping, raising chickens, flower arranging, and nutrition and food preparation. The emphasis is on sustainable community-based food production and industrious ideas about life and food.

“Our mission is to produce the freshest, highest quality food in the local marketplace. That’s really what Snuck Farms is all about,” Page said.